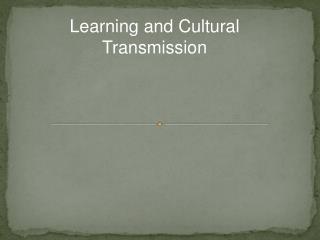 Learning and Cultural Transmission. Which is smarter?. Why Animals Learn????. ______________ - The ability to produce different phenotypes depending on environmental condtions. Length of Lifespan Changing Conditions. Why NOT learn?. It’s expensive!. What animals learn…. Chapter 3 (First Part) Digital Transmission Fundamentals - . information comes in a big variety. how does it all get

Enhancing Cultural Learning for Global and Local Engagement May 2012 - . an educational module developed by