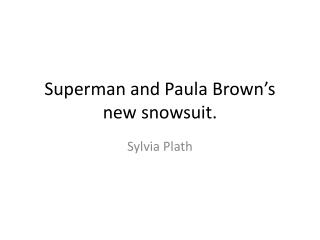 Paula Deen - . heidi faulkner. why paula?. i love cooking love southern food i love the food network i am interested in

Get your Chromebook and go to your Superman Article - . misplaced and dangling modifiers. how do you define the word,

Figurative Language: - . special effects for books!. writers could just give us the facts. example: superman can run

Brown/Risd - . building the connection. questionnaire. 1) how would you describe your academic experience at

The Brown Bear - . by kris. classification of a brown bear. a brown bear is a mammal and from the bear family. a unique

Super hero Cybercamp - . create your own super hero and comic strip!. who are you favourite super heroes?. iron man?.

Christopher Reeve - . this is christopher reeve :. he was an american actor, film director, producer, author and

Paula Marentette - Translating knowledge out of the classroom: the highs and lows of wikipedia as a platform for student

BROWN Committee - . pm bucharest 06-13 november 2008. agenta. what is the brown cmt? purpose of existance what is a

Superman and Me Vocabulary - . discussion questions. answer all questions on a sheet of notebook paper. write the number

DADDY - . references from sylvia plath’s poem. holocaust imagery – why?. plath was a child during wwii and saw the

DADDY - . references from sylvia plath’s poem. holocaust imagery – why?. plath was a child during wwii and saw the