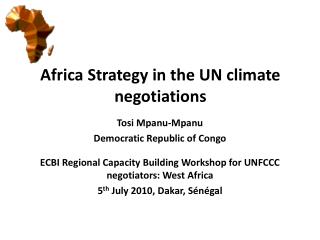 Stakeholders engagement in the climate negotiations - . challenges and opportunities. sebastien duyck, university of

Showdown in Copenhagen The Climate Negotiations face Reality - . tom athanasiou ecoequity. the right to development in a

Africa Climate Terms - . steppe. arid grassland with few or no trees not as dry as a desert similar to the prairie and

Understanding the role of the EU in future climate negotiations &amp; - Options for strengthened engagement with

Africa Subsea Strategy - . sunil tagare safnog-5. dialog needed between otts and carriers because they are so different.