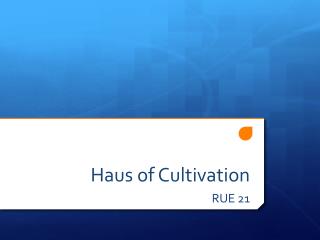 Cultivation of Viruses - . by. dr. emad abdelhameed morad. lecturer of medical microbiology and immunology. viruses are

Cultivation - . violence in the media. cultivation. how are perceptions of violence “cultivated” through the media?

COST OF CULTIVATION - . comprehensive scheme for studying cost of cultivation of principal crops was initiated in 1971.