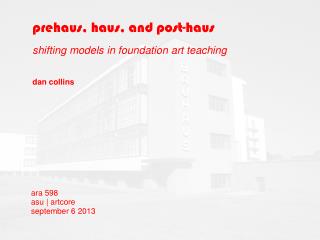 prehaus, haus, and post-haus. shifting models in foundation art teaching. dan collins. ara 598 a su | artcore september 6 2013. bauhaus history. The Bauhaus was born in 1919 after Walter Gropius was invited to combine the schools of art and craft in Weimar, Germany. IMAGE HAUS PACKAGES - We do things differently at image haus. your wedding day is a day full of moments; from when you