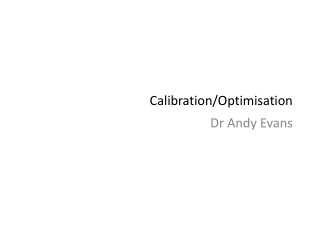 Consideration on MAC system calibration - . date: 2014-05. authors:. phy calibration is under construction, there has

CALIBRATION - . if the tests performed are not be accurate and precise the user must operate the calibration process.

Optimisation - . “optimisation” is a misnomer – “improvement” strictly a better term optimisation for execution