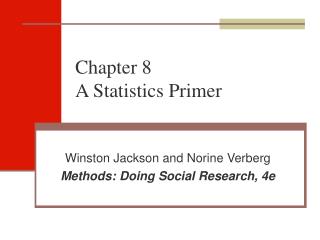 Chapter 8 A Statistics Primer. Winston Jackson and Norine Verberg Methods: Doing Social Research, 4e. Level of Measurement. Measures can be designed to have a higher, more complex level or a more basic, rudimentary level Influenced by how the variable is conceptualized A primer on statistics - . just what you need to get from data to conclusions…don’t freak out. summary. review on

AP Statistics Chapter 8 - . linear regression. correlation: the measurement of the direction and strength of the linear

Chapter 9 : A Primer on Medical Malpractice - . malpractice – what is it?. error - behavioral matter misperception

Chapter 8, part A - . microbial genetics. terminology. genetics study of what genes are, how they carry information, how

A Pepper Primer - . introducing the capsicums. a brief history. peppers are members of the genus capsicum. the first wild