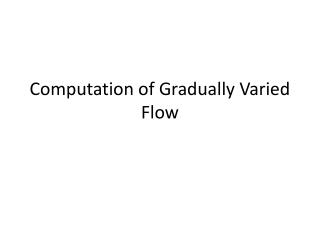 Design Flow – Computation Flow - . computation flow. for both run-time and compile-time for some applications, must

Varied uses of handmade papers! - Today, our planet earth is facing tremendous challenges and a big question mark is

Computation of the Flow of a Dual-Stream Jet with Fan-Flow Deflectors for Noise Reduction - . 1/13/2008. computational

Statistics and Varied types of signs - Signs are vital because 8 out of 10 customers enter a store based on them. you can

Theory of Computation - . exercise. design an fa for the language l of strings, defined over Σ ={a, b}, of odd