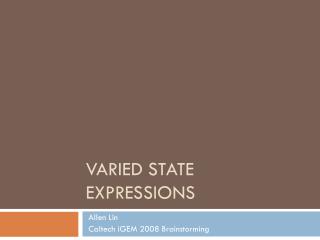 Varied State Expressions. Allen Lin Caltech iGEM 2008 Brainstorming. Why?. Currently standard to detect the expression of a gene: attach GPF in DNA so that it becomes transcribed and translated as part of a protein. Can we be more creative? Regular Expressions and Finite State Automata - . with thanks to steve rowe at cnlp. introduction. regular expressions

1.Varied Products/Projects - . allow students to make choices about how they demonstrate what they have learned, whether

1.Varied Products/Projects - . allow students to make choices about how they demonstrate what they have learned, whether

Complete &amp; Varied Sentences - . essential question: how do i write complete sentences and use varied sentence

EXPRESSIONS - . 1. asking and giving permission. expressions. responses. asking for permission can i stay up until the

Expressions - . an expression is a sequence of operands and operators that reduces to a single value. an operato r