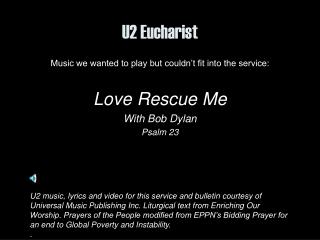 U2 Eucharist. Music we wanted to play but couldn’t fit into the service: Love Rescue Me With Bob Dylan Psalm 23. EUCHARIST - . from the greek word eucharistein meaning “to give thanks” or “be thankful” or

Eucharist - . source and summit of christian life (ccc 1324) &quot;sacrament of sacraments“ – all others ordered

Eucharist - . church and eucharist. what do you think of when you hear the word “church?” read pages 135-139 describe

Eucharist - . chapter 12. in the mass, the entire church, (on earth, in heaven, in purgatory) t hrough the spirit, u

The Eucharist - . manna from heaven . where did it start?. as catholic’s we believe the eucharist is the body and

The Eucharist - . the eucharist as the presence of christ. introduction the last supper – the institution. … the lord