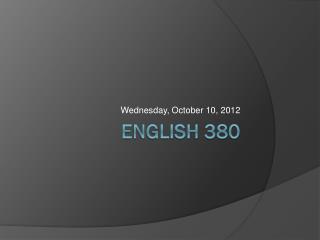 Wednesday, October 10 , 2012. English 380. Critical Thinking Through Cartoons. Fragments, Run-ons, and Comma Splices. Grammar Review. Review of clauses from Tuesday. But First -. Independent Clauses. Independent clauses have a subject and verb, and can stand alone as a sentence She ran IS 380 - . class 2 security management practices. i am not a lawyer (ianal). don’t take anything i say as legal

CE 380 - . environmental science and engineering. assignment. write on a piece of paper your name and your answer to the

IS 380 - . security architecture and design. what are the three pillars of infosec ?. computer hardware architecture .

Construction Engineering 380 - Indemnification. can have varying ?degrees" of responsibility (liability)first