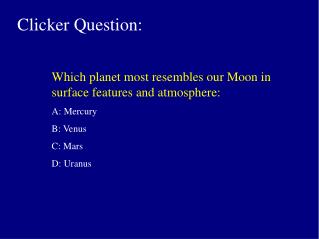 Clicker Question:. Which planet most resembles our Moon in surface features and atmosphere: A: Mercury B: Venus C: Mars D: Uranus. Clicker Question:. Earth’s average density is about the same as: A: water B: an iron meteorite C: balsa wood D: a chunk of volcanic rock.