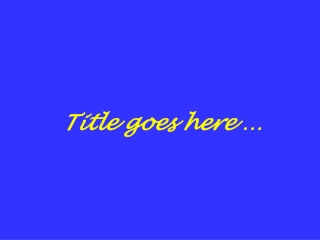 Writing is an act of invention - . 5 paragraph essay the formula. paragraph 1: introduction with thesis as the last

session title here - . add speaker names here. track name - date - &amp; anything else you need to include that maybe

Title I Programs in the Jackson County School District - . an overview. what title programs do we have in the jcsd?.