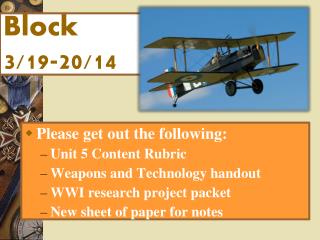 Block 3/19-20/14. Please get out the following: Unit 5 Content Rubric Weapons and Technology handout WWI research project packet New sheet of paper for notes. Project Reminders…. You should be working on your parts of the essay and the final product this week and next for homework. Lecture 3 (block B) - . nerve cord-like bundle of fibers made up of neurons, through which, sensory stimuli &amp;