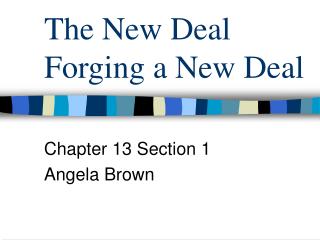 The New Deal Forging a New Deal. Chapter 13 Section 1 Angela Brown. The New Deal became FDR’s program of relief, recovery, and reform aimed at combating problems caused by the Depression. FDR was not sure exactly how the New Deal would work…. Restoring the Nation’s Hope. The New Deal - Roosevelt's administration. the brain trustscholarly advisors who got to work right awayfolksy stylelike

New Deal: Big Deal! - . although the nation had begun to recover under the new deal, the recovery was incomplete. incomes

The New Deal - . &quot;i pledge you, i pledge myself, to a new deal for the american people .” franklin d.

The NEW DEAL - . fdr’s response to the great

The New Deal - . how and why did the federal government influence american economic and political issues during the

The New Deal - . reeling from the economic downturn and angry about president hoover’s refusal to use the government to

New Deal - . warm-up. why did republicans hate the new deal? why did some democrats hate it ? is being an artist a real

The New Deal - . chapter 23. keep in mind. throughout this chapter you need to think about what fdr did for america and