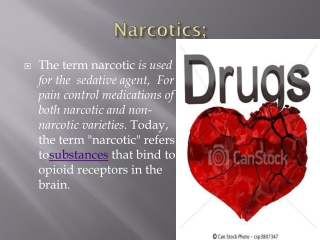 Narcotics;. The term narcotic is used for the sedative agent, For pain control medications of both narcotic and non-narcotic varieties. Today, the term "narcotic" refers to substances  that bind to opioid receptors in the brain. . History:. Narcotics - . an industry. the drug market. a global network of illegal trade a $321 billion per year industry. street

Narcotics - . chapter 11. narcotics. in our final view of drugs in depth, we now turn to narcotics, which is the most

Narcotics - . definition:. drugs that act on the brain and block the sensation of pain. watery eyes itching breathing

Narcotics - . essential question. what is a narcotic and how does it affect the human body? what is a hallucinogen and

Narcotics Anonymous is… - . a global fellowship of men and women for whom drugs had become a major problem an

Central Narcotics Bureau - . the central narcotics bureau (cnb) was established in 1971 as the primary drug enforcement

NARCOTICS ANONYMOUS SERVICE STRUCTURE - . one addict helping another. na group. an na group is the core of the program.

NARCOTICS ANONYMOUS SERVICE STRUCTURE - . one addict helping another. na group. an na group is the core of the

Drugs – Sedatives, Hypnotics, and Narcotics - . by kyle padgett. need to