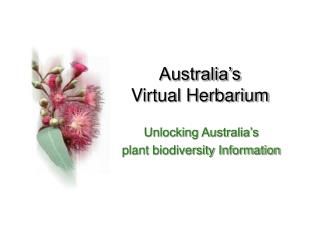 Australia for - Icsmge 2017!. sydney, australia has announced it will bid to host the conference of the international

Let's take a trip to the Australian history, &amp; social science with me!! - Virtual tour in australia!!. let's take

The Macroalgal Herbarium Consortium - . accessing 150 years of specimen data to understand changes in the marine/aquatic

Digitization and the richness of type specimens at the Paris Herbarium - - . pascale chesselet &amp; jean-noël labat

Australia - . by lawton henry margaret. about australia. australia is dry and hot. it has beaches, and the great b. reef.

Most Innovative Uses of Virtual Reality with Oculus apps