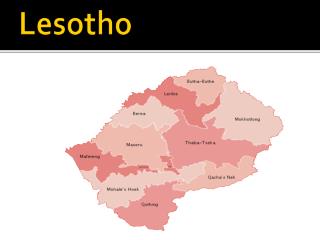 Lesotho. About Lesotho. The Kingdom of Lesotho landlocked country entirely surrounded by the Republic of South Africa . over 30,000 km² in size estimated population almost 1,800,000. economy is based on : diamonds exported all over the world LESOTHO - . lesotho: enabling activities for the implementation of the united nations frame-work convention on climate

Lesotho Presentation: - Lesotho meteorological services we are at your service/re sebelise. lesotho presentation: