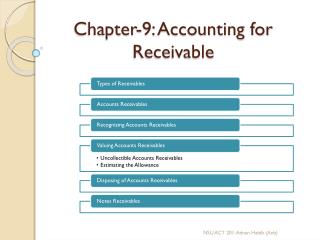 Chapter-9: Accounting for Receivable. Types of Receivables. Amounts due from individuals and other companies that are expected to be collected in cash. Amounts owed by customers that result from the sale of goods and services. Claims for which formal instruments of credit are issued

Notes Receivable - . a written promise to pay usually longer-term and more formal usually for a stated amount and a

Chapter 2: Accounting for Transactions - . the first step in the accounting process is transaction analysis (introduced

ACCOUNTING STANDARD-9 - . revenue recognition. it does not deal with revenue from:. hire-purchase/ lease agreements

Accounting for Sales and Accounts Receivable

Considerations for Reporting Accounts Receivable - . ubo working group november 16, 2006. what do we have to do?. we must