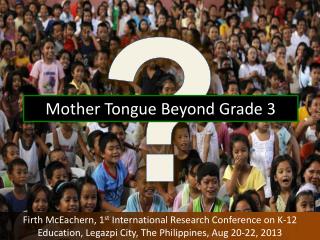 MOTHER TONGUE versus TARGET LANGUAGE - . l1 vs l2. if we did not keep making correspondences between foreign language

1. COMMUNICATION IN THE MOTHER TONGUE

Welcome to our Mother Tongue Coffee Afternoon - . purpose of today. explain why we value mother tongue and s hare some of

A WARM WELCOME TO MOTHER TONGUE DEPARTMENT - . our mtl vision. 学生热爱母语， 并愿意终生学习母语。. our