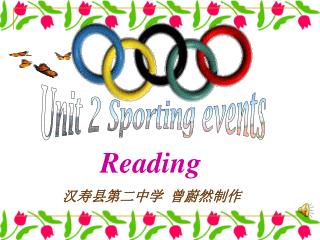 Unit 2 Sporting events. Reading. 汉寿县第二中学 曾蔚然制作. Do you remember the moment?. IOC (International Olympic Committee). It is an honor to hold the Olympic Games. The Honourable Games. Brainstorming. What do you know about the Olympic Games?. the Olympic flag. Mascot. Motto. Emblem.

What is the link between Trafficking and Big Sporting events? - Link has been made most forcefully by abolitionists

Unit 11 Past Events - . a movie a play a concert a party a game a speech. past-expressions. yesterday was saturday. today

Cultural &amp; Sporting events - . in humpolec. the ball of music. march the school of art in humpolec several

Current Events #2 - . there be a storm a brewing. typhoon usagi has killed at least 25 people in guangdong province of