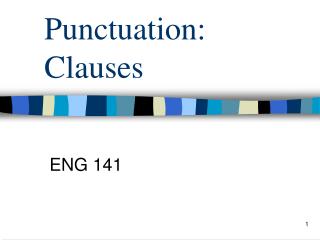 Punctuation: Clauses. ENG 141. Beginning Punctuation. GOALS Distinguish between Phrases and Clauses Main and Subordinate Clauses Know How to Punctuate Clause Combinations. Vocabulary. A Phrase is any group of words A Clause is a group of words with a subject and a verb Subcontracting and Flow Down Clauses: Understanding What the FAR Does - and Does Not - Require - . breakout session #605

Punctuation, Grammar, and Usage Exam Review - . fatima prefers to walk to market, while i would rather go by helicopter.

DGP – Sentence 13 - . day 1 punctuation and capitalization. sentence. she shold have throwed out them magazines dated

DGP – Sentence 18 - . day 1 punctuation and capitalization. sentence. after we red the play the taming of the shrew mrs

Noun Clauses - . a noun clause is a group of words with a subject and a verb. who whom when which how where

Punctuation - . “the traffic signals of writing”. the comma [,]. misuse of the comma accounts for half of all

Janus clauses For Employees Handbook - . publicis groupe is our “ mo ther company”. you will find in this section the

Clauses and phrases showing contrast and exception &quot; - . a clause is a collection of words that has a subject