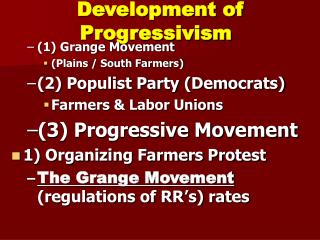 The Progressive Era - . us history mr. ishmael. section 1: objectives. by the end of this lesson, i will be able to: 1.

DEVELOPMENT OF UROGENITAL SYSTEM - . development of uregenital system. the urinary and reproductive systems a closely

The Progressive Movement in the United States 1890-1914 - . the rise of progressivism. a series of reform efforts-