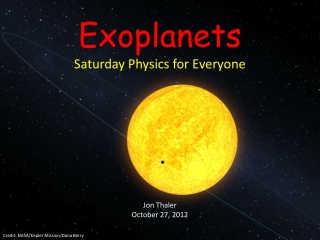 Exoplanets Saturday Physics for Everyone Jon Thaler October 27, 2012. Credit: NASA/ Kepler Mission/Dana Berry. Outline. What is an exoplanet? Why are they interesting? How can we find them? Exolife ?? The future. What is an Exoplanet?. T core. Saturday 3 October - . jewish - sukkot. sukkot or the feast of tabernacles, commemorates the years that the jews spent