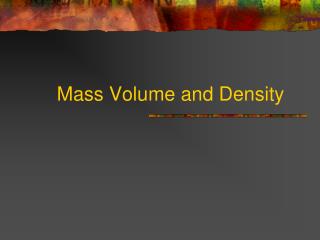 Mass Volume and Density. What is matter?. Matter is what the universe is made of. Matter is anything that has mass and volume. Examples include just about everything (any solid, liquid or gas). Example of things that are not matter include electricity, sound and light. MASS, VOLUME, AND DENSITY - . mass. mass is the amount of matter in an object. it is measured in grams. volume. volume is

Mass / Volume / Density - . sarah stack and ash letts . mass. mass is a measure of the amount of material in an object.

Density, Weight, Mass, and Volume - . weight versus mass. are they related? how are they different? a beach ball floating

Length, Volume, Mass, and Density - . length. how “long” something is a ruler is used to measure length. practice.

Weight, Mass, Volume and Density - . what is weight?. weight is a measure of the force of gravity on an object on earth,

Introduction MASS DENSITY AND VOLUME - . measuring mass. mass - the quantity of matter in an object standard unit is gram

Mass, Volume, &amp; Density - . mass. measurement of the amount of matter (or stuff) in an object measured in

Mass, Volume, &amp; Density - . mass. measurement of the amount of matter (or stuff) in an object measured in

Volume, Mass, and Density Vocabulary Lesson - . matter – anything made of atoms and molecules. matter can be a solid, a

COS- 2a Define mass, volume, and density - . lifeboats. let me tell you a story…. question what will happen to the coke