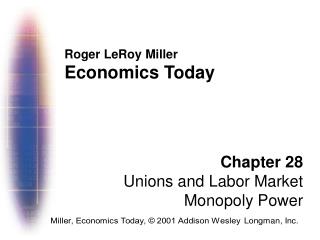 Roger LeRoy Miller Economics Today. Chapter 28 Unions and Labor Market Monopoly Power. In the early 1960s, one out of every four American workers was a union member. Today only about one in ten belongs to a union. Why has union membership declined?. Introduction. Learning Objectives. Roger LeRoy Miller Economics Today - . chapter 22 the firm: cost and output determination. since 1989 there have been

Michael LeRoy - The gleason initiative is a charitable cause which is very close to michael leroy’s heart. michael

J.T. LeRoy - By thomas joannides. j.t. leroy. motivations of the

Leroy Jetta - . early life. he was born 6 july. he was born in pingelly. his original team was south fremantle (wafl).