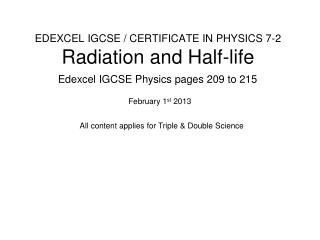 Half Life - . the time it takes for half of the atoms in a sample to decay into a daughter product half lives are given

EDEXCEL IGCSE PHYSICS 2-2 Electric Charge - . content applying to triple science only is shown in red type on the next

M16 - . choosing subjects for igcse. what is igcse?. the international general certificate of secondary education we

Atomic Physics - . core. (d) half-life -use the term half-life in simple calculations which might involve information in

Half-Life - . h alf-life is the time required for half of a sample of a radioactive substance to disintegrate by

Half-Life - . definition . a half-life is the amount of time it takes for half of a radioactive sample to decay.

EDEXCEL IGCSE - Edexcel specification. section 5: solids, liquids and gases b) density and pressureknow and use the

What We Know and What We Don’t Know About Radiation Health Effects - . an educational briefing by the health physics

Half Life - . the half-life of a quantity whose value decreases with time is the interval required for the quantity to