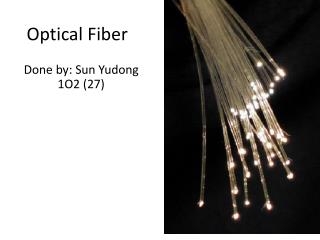 Optical Fiber. Done by: Sun Yudong 1O2 (27). History. Optic Fiber is an old and simple technology guarded by the principles of refraction Optical Fiber - . optical fiber : is a fiber made of pure glass, can be long and high, not exceeding a thickness of thick

Optical Fiber Communications - . week 2. skew rays. another category of ray exists which is transmitted without passing