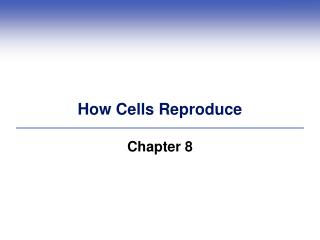 Animal Cells - Start. workshop task. in this workshop you will compare and contrast the major structures and functions of

Chapter 14 Cellular Reproduction - Introduction. one of the important life functions of living things is their ability to

Animal Cells - Next. animal cells. welcome scientists! thank you for coming to our internet workshop. in this workshop

Cells - . basic unit of structure and function of all living things microscopic in size body is made of trillions of

Chapter 9 - . the continuity of life: cellular reproduction. why do cells divide?. cells reproduce by cell division , in

Woodpecker - . lee kampshoff and rachel schwans. cells. woodpeckers have many kinds of cells such as animal cells, blood

Regulating the Cell Cycle - . cell division rates. cells do not all reproduce at the same rates stomach cells, skin

I. Mitosis - . happy halloween! . why do animals shed their skin?. a. asexual reproduction. when do cells use it?

How do flowers reproduce? - . how bout them flowers? ummm, ummmm goood!. true or false. t/f sperm cells do not have to

DSTP Science Review - . biology. what are the characteristics of living things?. obtain, use and transform energy respond

The Cell - . overview: the importance of cells all organisms are made of cells. the cell is the simplest collection of

Objective 2 - . the student will demonstrate an understanding of the organization of living systems. living things are.