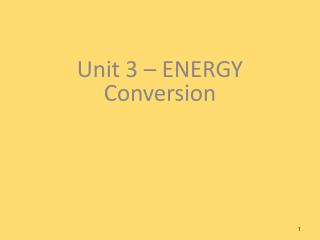 Unit 3 – ENERGY Conversion. The Sun is the ultimate source of energy on Earth. Then what?. Plants convert the SOLAR ENERGY into CHEMICAL ENERGY (glucose and other high-energy carbs) Julius Mayer discovered this conversion in 1845. Energy flow through ecosystems. Energy conversion: Fermentation - . announcements. no quiz during next week lab. session write an informal summary about

Electrical Energy Conversion - Click here first. electrical energy conversion. what happens to the coal that is burned in

Energy Conversion - . energy can be changed from one form to another. changes in the form of energy are called energy

Unit Conversion - . and the convert function. issues. converting a measurement from one unit to another. e.g. tablespoon

Unit 3 Energy and States - . t he s tate of matter of a substance depends on several things a ttraction between particles

Unit conversion - . the formula for density d is where m is mass and v is volume. if mass is measured in kilograms and