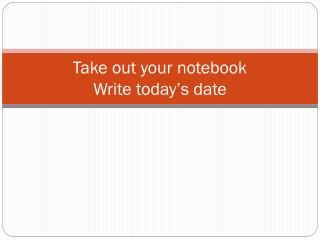 DO NOW AND LEARNING GOAL - . do now: please write down today’s learning goal into your notebook. be sure to label your

Pig Personality Test - . get a clean piece of paper write your name on the right hand side top corner write the date on

Goals for this quarter: - . find your writing voice how? practice! review grammar after the review, you are responsible

Tuesday, January 17 th 2012 Remember to write the DATE, the QUESTION and the ANSWER - . no warm up today! find a seat

The Lorax by Dr. Seuss - . has anyone read this book or seen the movie? what is it about?. while we watch parts of the

Tuesday, January 17 th 2012 Remember to write the DATE, the QUESTION and the ANSWER - . no warm up today! find a seat

Bell Work - . can you answer this riddle? write your best guess in your notebook. a young lady looked at a picture and