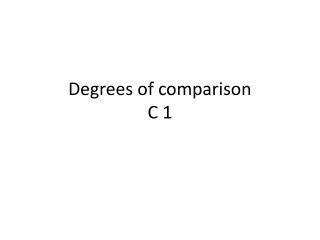 Degrees of Comparison - . afirmativo:. adjetivo adv. as + + as. exemplo: as rich as - tão rico como. negativo:. not so

DEGREES OF COMPARISON - . example. 1. agus is tall danil is taller than agus danil is more tall than a gus deta is the

Degrees of Comparison - . 3 degrees of comparison. positive, comparative, superlative adjectives and adverbs can be

COMPARISON DEGREES - . as adjectives as. positive degree, cirinya as good as as tall as as beautiful as as

Understand the Degrees Of Comparison - . look at the picture and understand the sentences. the man is taller than the