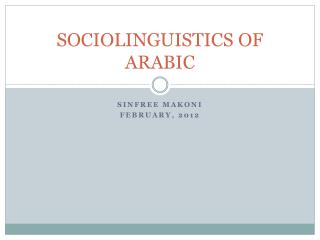 SOCIOLINGUISTICS OF ARABIC. SINFREE MAKONI FEBRUARY, 2012. RATIONALE. Question: Is it possible that the US-led war on ‘terror’ through the images, discourses, interpretation of Arabic and media discourses: under cuts its anti-terrorism project potential misleads the general public Basic of Sociolinguistics - Definition, type of concept, pidgin and

Sociolinguistics - . i. inter-relationships between linguistic form and social function ii. what should linguistics

Sociolinguistics - . language in use as a social identifier varieties of speech knowing what to say, and how and when to

Sociolinguistics - . how to capture variety in language as a multifaceted social phenomenon. approaches of theoretical