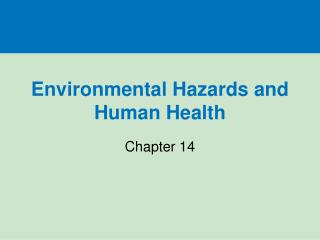 Environmental Hazards and Human Health. Chapter 14. Section 14-1. What major health hazards do we face?. We face many types of hazards. Biological hazards from more than 1,400 pathogens that can infect humans. pathogen - an organism that can cause disease in another organism. Bacteria. Bioterrorism Awareness: Protection of Human and Animal Health - . human health professionals. why are we here?. september

Chapter 15: Environmental Health, Pollution and Toxicology - . disease is often due to an imbalance resulting from poor

Environmental Health and Safety (EHS) Orientation Training - . faculty and staff. introduction. the objectives for this