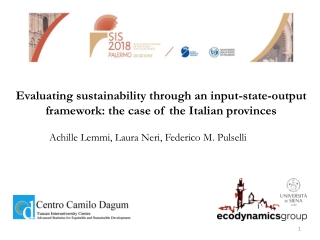 Evaluating sustainability through an input-state-output framework: the case of the Italian provinces Achille Lemmi, Laura Neri, Federico M. Pulselli. State of art The concept of sustainability requires a multidimensional vision where environment , economy and society are linked. STATE OF THE ART - . section 2. overview we are going to briefly describe some state-of-the-art supercomputers the goal

State of the Art - . this chapter gives an overview of currently used methods and techniques in enterprise architecture.

State of the Art - . measuring and understanding adherence to art in resource poor settings. what is medication

State of the Art - . the status and trends of hiv/aids epidemics karen stanecki, us census bureau and chair of monitoring

Research: State of the Art - . professor derek pheby. where are we starting from? (1). what we know: me is a syndrome

State of the Art Testability - Background. the industry offers great advice on testabilityprojects that follow that

The State of the Art - . cynthia dwork, microsoft research . texpoint fonts used in emf. read the texpoint manual before

State of Art Report - Greece - . national vocational educational system with regards to the recognition of non-formal and

State of the Art - RFID