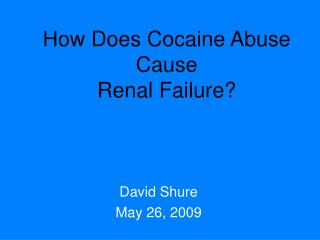 Interviewing Children - . a guide to accompany the training video for child welfare social workers and forensic

Intra-Abdominal Hypertension (IAH) - . the silent killer!. what was their intra-abdominal pressure?. have you ever seen a

Renal Physiology for Lab - . urinalysis lab . 1. what would most likely be the cause of a urine sample with a positive

“Bath Salts” the Legal Cocaine - . when you think of bath salts you think of little beads that are used to improve

Cocaine and Crack - . what is cocaine?. cocaine is a strong, highly addictive central nervous system stimulant that

Cocaine and Crack Cocaine - . vocabulary. drug affecting the central nervous system, which can cause dizziness,