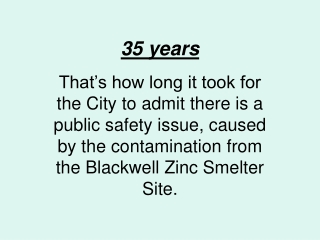 35 years. That’s how long it took for the City to admit there is a public safety issue, caused by the contamination from the Blackwell Zinc Smelter Site. Now the City says they are going to file lawsuit?. Algebra - . excellence. zahara is five years old and maddox is four years older. form a relevant equation. use it to find

Growth and Development - . child development. the study of a child from conception to age 18. stages of development.

Opening Remarks / System Overview - . 0. is this your first time to san francisco?. yes no. 0. how many years have you

PLI QUIZ - . six. how many types of policies are there in pli?. 55 years. what is the maximum age limit for getting a