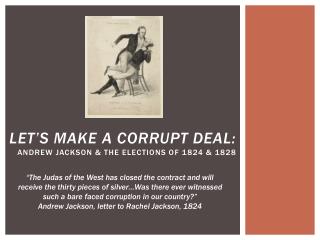 Let’s Make a Corrupt Deal: Andrew Jackson & the elections of 1824 & 1828. “The Judas of the West has closed the contract and will receive the thirty pieces of silver…Was there ever witnessed such a bare faced corruption in our country?” Andrew Jackson, letter to Rachel Jackson, 1824. Elections and Voting - . types of elections. primary elections – voters decide which of the candidates within a party

THE ELECTORAL COLLEGE - . definition. a group of people named by each state legislature to select the president and vice

The Age of Jackson Rebirth of Jeffersonian Democracy - . the election of 1824. until 2000…the most compelling election

CHAPTER 22 - . the new deal. objectives. analyze the impact franklin d. roosevelt had on the american people after

Shaping - . chapter 8. simple reinforcement. before: andrew has no gum. behavior initial: andrew moves his lips. after:

Ch. 14: Andrew Jackson and the Growth of American Democracy - . compare the following two images:. the first image is