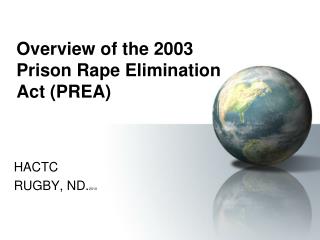 Overview of the 2003 Prison Rape Elimination Act (PREA). HACTC RUGBY, ND. 2010. PURPOSE:. To ensure detection and prevention of inmate sexual assault while an inmate is in the legal and physical custody of the HACTC. GOAL. Expectations:

Rape of Nanking - . slides. (some of) the following images are graphic due to their violent nature: your warning has

Overview of the 2003 Prison Rape Elimination Act (PREA) - . these materials were developed by the moss group, inc. under