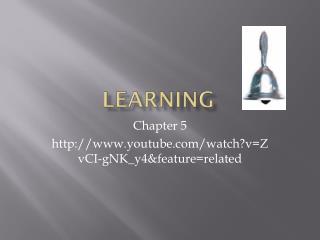 Learning. Chapter 5 http://www.youtube.com/watch?v=ZvCI-gNK_y4&feature=related. What is Learning?. LO 5.1 Learning. Menu. Learning – any relatively permanent change in behavior brought about by experience or practice.