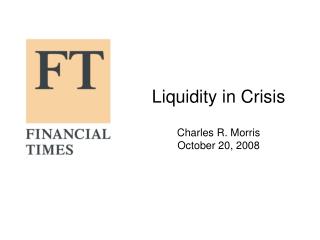 Liquidity in Crisis Charles R. Morris October 20, 2008. Where We Are Now. Bank systemic solvency no longer at issue Serious recession inevitable Big in drop Personal Consumption share of GDP both essential and inevitable Post-crash economy likely to be quite different from recent experience. Charles Tybur Intel Corporation 20 October, 2006 - We live in a “flat” world — each country competes with all

Liquidity Crisis &amp; its causes in Nepal - . we would like to thank for their suggestions and help. mr. achyut pant

The October Crisis - . terrorism in canada. separatism in quebec. the quiet revolution