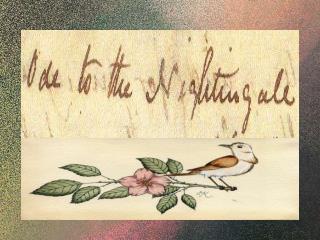 John Keats - . ode to a nightingale. style of the poem this poem is written in disciplined 10-line stanza form which

By John Keats - Ode to a nightingale. by john keats. my heart aches, and a drowsy numbness pains my sense, as though of

John keats - . background of john keats. born in england in 1795 and died of tuberculosis when he was 25 but he had

John Keats - . by: analilia lopez. who was john keats?. john keats was born on october 31, 1795 to thomas and frances

On the Grasshopper and the Cricket John Keats - . ‘the poetry of earth is never dead.’. background . keats was born

John Keats - . an introduction. a brief biography. 1795-1821 studied to be an apothecary, then a surgeon first

John Keats - . born on october 31, 1795, in london the oldest of four children, he lost both his parents at a young age.

ENGLISH CLASS IV THE NAUGHTY BOY - . about the author. john keats. john keats was an english romantic poet. he was born

On the Grasshopper and the Cricket By John Keats

John Keats - . mortality, love and beauty. &quot;here lies one whose name was writ in water.&quot; . outline.