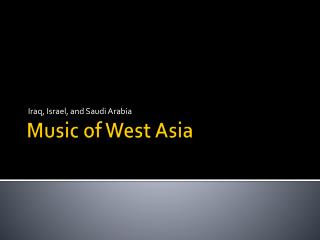 Iraq, Israel, and Saudi Arabia. Music of West Asia. Iraq. Music of Iraq. The music of Iraq or Iraqi music, (also known as the Music of Mesopotamia) encompasses the music of a number of ethnic groups and musical genres. Music of Asia - . china, japan, and india. china and japan. similarities: music is tied closely to dance and drama opera

The Music of Asia - . a breif overview. asia has many countries and each has a unique mix of sounds and styles. we will

Music of Eastern Asia - Japan, china, korea, taiwan. music of eastern asia. time to write…. what are your preconceived

South West Asia - . the “middle east”. why is southwest asia called the middle east?. it was in the middle of the

SOUTH West ASIA (MIDDLE EAST) - . a glimpse of the countries. afganistan. what to wear? men should wear conservative

The Interest in South-West Asia - . what are the factors that led to the usa participation in the perisian

Southeast Asia and the West African Empires - . hist 1007 12/2/13. spread of islam. concentration on the coast