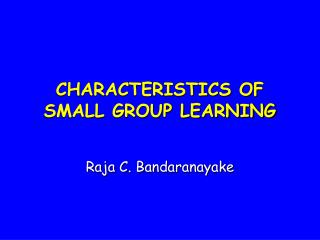 Small Group learning - . by dr asim pasha gpvts st2 dpow. introduction. do you teach (or have you ever taught) small

SMALL GROUP COMMUNICATION Learning Unit 6 - . what we should learn. explain what a small group is difference between

Characteristics of a Learning Organization - . 1) there exists a shared vision which everyone agrees on. 2) people

Scaffolding Children’s Learning at Small-Group Time - . objectives. participants will be able to: state the rationale

Professional Characteristics Of A Medical Group - Today patients have become more aware of their rights. therefore,

Purposes of small group discussions - . research findings: ‘breaking the mould?’. an early study of as science