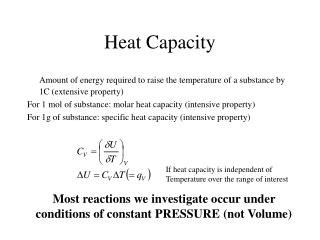 Heat Capacity - . the work - energy principle applies to all objects. if an object speeds up it gains kinetic energy. if

Heat capacity - . the electronic heat capacity c e can be found by taking the derivative of equation (19.18): for

Specific Heat Capacity - . “one cool judgment is worth a thousand hasty counsels. the thing to do is to supply light

Grade 8 Science - . unit 1:. water systems on earth. chapter 3. heat capacity.  a measure of how long it takes a

6.3 Heat Capacity - . if you were to heat up a pot of water on your stove top it would take a considerable amount of

Purpose - . understand how the total energy in a closed system is conserved during heat exchange. learn how to determine

Chemical Reactions That Involve Heat - . objectives: 1. describe the difference between exothermic and endothermic

Science 10 – Hydrologic Cycle and Heat Capacity - . objectives. define specific heat capacity and use it to calculate

HEAT &amp; TEMPERATURE - . temperature scales. heat transfer and warming. what happens to the heat?. where does the

Specific Heat Capacity - . specific heat capacity (c): the amount of heat required to raise the temp. of one gram of a

CALORIMETRY - . calorimetry : measurement of heat changes the heat transferred is proportional to the mass of the object