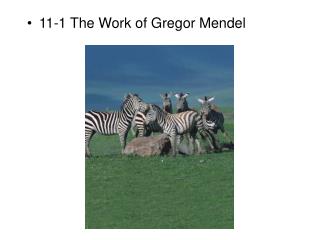 Introduction to Mendelian Genetics - . the work of gregor mendel. a. genetics is the scientific study of heredity . every

Introduction to Work - . announcements. post test is due tomorrow. energy and work. a body experiences a change in energy

Chapter 11 - . introduction to genetics (no two are the same). section outline. section 11-1. a. gregor mendel’s peas

Chapter 14: Mendel and the Gene Idea - . phenotypic features of organisms are characters ; each can have a variety of

Lesson Overview - . 11.1 the work of gregor mendel. think about it . what is an inheritance? it is something we each

Where do you fit in the work of the Lord? - . in this chapter we see the heart of the apostle paul. he was thinking about

Introduction to Genetics - . the varied patterns of stripes on zebras are due to differences in genetic makeup no two

DNA - . dna. how dna was discovered. scientists that determined structure and importance of dna. 1866 gregor mendel –