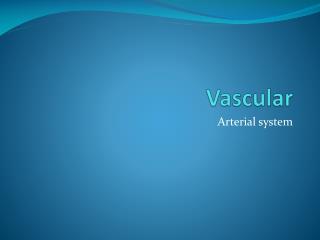 Vascular. Arterial system. Aneurysmal Vascular Disease. Defined as a permanent localized enlargement of an artery to more than 1.5 times its expected diameter . Vascular Surgeons at USA Vascular Centers - If you are looking for pad treatment or vascular treatment, then get the best

Vascular Trauma - . basic science conference may 31, 2006. which of the following is the most common location for a