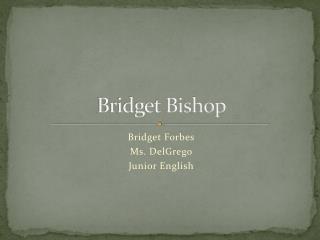 Bridget Bishop. Bridget Forbes Ms. DelGrego Junior English. Birth/Childhood. Bridget was born sometime around 1632 in England. There is not much known about her family but her maiden name was Playfer . Personal Life. Bridget - . practicing the conditional form . bridget. bridget is a publicity used by the government of nova scotia . the

Bridget Riley - . op art - the art of optical illusion. what is “op” art?. “op” is short for optical. optical

Bridget Jones - Accessing technology. bridget jones. access to technology. where do you want to go?. where to start?.

Bridget Hogan - . director, publications and marketing the nautical institute. what does it mean to be

Elizabeth Bishop - . distinct, and difficult to define. main themes. in ‘the fish’, ‘filling station’, ‘the