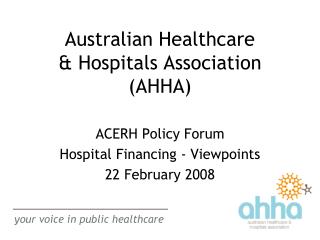 How do we see the healthcare's digital future and its impact on our lives? - "healthcare is undergoing major changes

Australian Approach to Dealing with Cybercrime - . “we should not be fighting crime of the twenty-first century with

Investor Presentation June 2005 - . awb - a snapshot…. australian wheat board created in world war i, privatised in