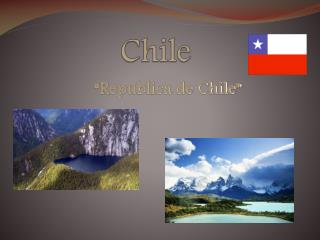 Chile. “Republica de Chile”. Flag and Coat of Arms. The star represents a guide to progress and honor. Blue symbolizes the sky. White is for the snow covered Andes. Red stands for blood spilled to gain independence. Was designed in 1834 by Charles Wood Taylor

Chile - . chile is located on the west coast of south america. it shares borders with peru, bolivia, and argentina.